Nelly Poidevin has worked as a bowmaker for almost 40 years.
Having trained with Jean Grunberger in the great tradition of French bow making, she specializes in the reconstruction of baroque and classical bows since the late eighties.

She has since extended her research field to the Middle Ages and the Renaissance, which opens up an overall perspective of the evolution of the bow. 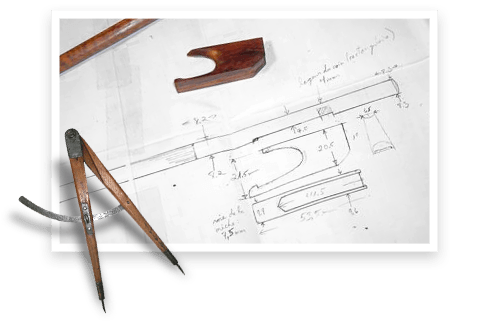 Reconstruction of historical bows: a gaze into the past

Since its introduction in Europe in the early 11th century, the bow has adopted a wide variety of sizes, shapes, weights, balances, woods and manufacturing process.
Throughout history, musicians and makers have adapted it to the changes in the repertoire and sound preferences.

But, in the early 19th century, a model of bow emerged from this profusion and quickly became a standard. Its widespread adoption put an end to all these changes. Today, more and more historically-informed musicians are searching for the most appropriate tool for performing music from each era by drawing from the various solutions proposed by our predecessors.

Rebuilding bows exactly as they were aims to meet this need and the bow maker must implement rigorous working methods to get as close as possible to historical reality.

Our knowledge of period bows is based, in part, on the study of original ones preserved in historical collections.

But, as extant bows prior to the 18th century are very rare, the bow maker must turn to other sources. The information on these early bows is mainly to be found in the iconography.

Fortunately, 16th and 17th century paintings are very realistic and the information that they provide with can be supported by several writings: historical teaching methods, treatises on instruments and compositions which give an idea of the sound aesthetic of the period.

As for the medieval era, we cannot rely on written souces : there are very few treatrises on instruments and even no music strictly composed for any bowed instrument. Visual representations, however, are numerous, but they are difficult to exploit. Sculpture, which is a rich source of information for instrument makers, is not very helpful to bow makers. Very few bows were carved in stone because they were long and thin and were too fragile. They are often broken or simply absent.

Thus we must resort almost exclusively to miniatures from manuscripts, even though their analysis requires caution. These miniatures are quite stylized. They suggest more than they describe. However, it is necessary to immerse oneself in them and not to neglect the pictures which seem whimsical at first glance .

A shallow approach of the iconographical material often leads to reject the most puzzling representations and to consider them as the artist's fancies. But a thorough examination of a large number of illustrations gradually reveals recurrences of shapes and details. And very often a classification emerges from these repetitions. If this typology can be linked to an organological or musical evolution, it fully justifies the relevancy of iconographical evidence. 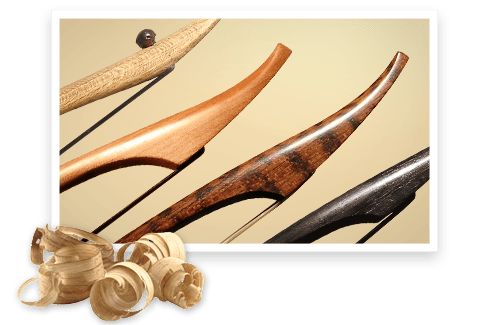 Choice of woods: their role in musical aesthetics

The design of a bow is inherently linked to the choice of wood. The properties of the material determine the shape and dimensions of the stick. They play a great role in its performance qualities, not only its responsiveness but also the specific tone it develops on the instrument.

To copy baroque and classical extant bows, when the species can be identified, it is appropriate to evaluate the mechanical properties of the wood used and to seek the closest specimen in the same species.
The scarcity of surviving bows dating back to the 16th and 17th centuries implies more uncertainty concerning the choice of wood. It is therefore mainly based on written sources. Archive documents, such as craft guilds charters, invoices or inventories after the luthiers' death, treaties and instrumental methods, sparingly provide with clues about the materials used. These sources are helpful even for the Baroque period since they reveal the use of a wide variety of species, whereas the bows of the museum collections are mainly made of snakewood, a precious wood that justified the preservation of these more prestigious bows. It is also necessary to investigate the evolution of wood availability and its supplying and trading routes.

To rebuild medieval bows, the choice of European wood is obvious. Due to the lack of sources, the selection is based on the mechanical properties essential to the making process and on the dynamic qualities. 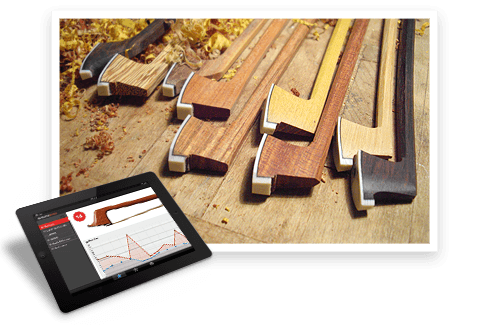 Scientific approach : a glance to the future

An inventory of the various species that may have been used for bows throughout history has been completed.

Mechanical properties have been assessed by Iris Brémaud, researcher at the Laboratoire de Mécanique et Génie Civil in Montpellier, and related to the different models of bows that accompanied changes in playing habits. This study has highlighted the relationship between wood selection and evolution of bow making. (see the study).

It shows distinct ranges of properties for each period. .Such historical trends in the adaptation of bow shape and material can provide inspiration sources for future developments.
Notably, the data collected about the diversity of mechanical properties of woods could, in combination with analyses on the structure itself, suggest new adjustments between woods and bow geometry to overcome the new difficulties in pernambucco supplying.